Serial entrepreneur CEO Andrew J Scott has launched a handful of online businesses, survived to tell the tale and returned as founder and CEO of location-based mobile app Rummble.

Scott was on hand to offer delegates at GeeknRolla on Tuesday some of his hard-earned advice for running start-ups… See the video below at time market 2.36.

1. Don’t choose a crap name: One of Scott’s earlier start-ups was called Playtxt – not a bad concept, but its name was remarkably similar to a UK brand of women’s underwear and, in the States, a brand of tampons.

2. Find a co-founder who is good or don’t get one. “Trust your gut instincts about people.”

3. Location: Scott recommends thinking hard about where your business is based. He also suggests entrepreneurs consider at least visiting Silicon Valley. 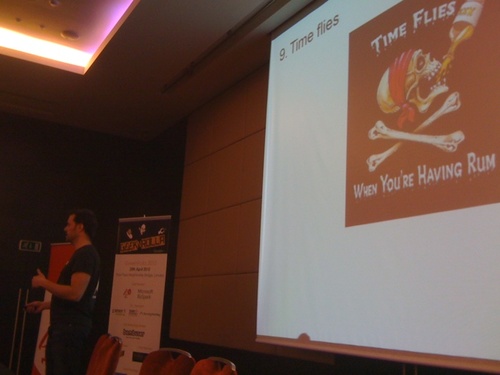 4. Hire (and fire) the right people. “Everytime I fire someone I wish I had done it a month earlier,” he says.

5. Delegate: “If someone can do something 70 percent as well as you can, delegate to them.”

6. Have a one-line pitch: “It has to be about the value of what you do,” according to Scott, who mentions the pitch for the movie Alien – “Jaws in space” – as a classic, simple three-word pitch.

7. Beware of the bubble: “Not everyone is on Twitter and it’s worth remembering that. Don’t spend all your time in the echo chamber/Twittersphere.”

10. Practice pitching: “If you cannot practice really pitching to someone on your team or in your family, how are you going to do it when you’re asking for half a million quid?”

Lastly, Scott says it pays to help out others in the start-up community – you’ll get help in return – and to take some time out and relax once in a while.