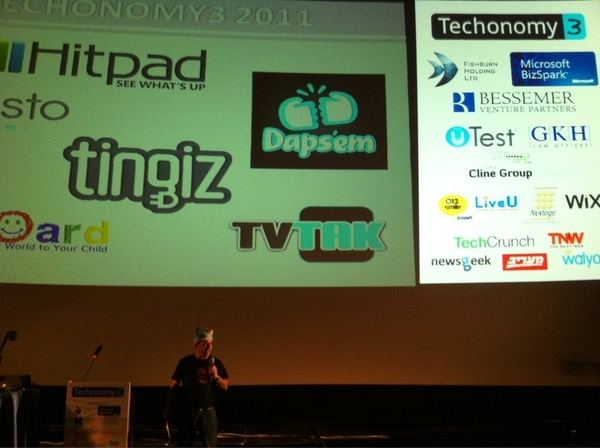 A few weeks ago I had the opportunity to visit Tel Aviv and get a brief taster of the startup scene here. At one point I was interviewed by The Marker, a business newspaper and, after a couple of days of trying to find someone who wasn’t in a startup (outside of the hotel staff) I had to admit to the journalist “If you threw a stone in Tel Aviv, it would probably hit a high-tech entrepreneur.”

Today, six new startups launch at Techonomy3 in Tel Aviv, joining the mass of startups here, and I would say all of them are pretty interesting one way or another. Here are the individual write-ups on each of the startups which launched (the names of the companies links will go live as they launch): HitPad, Dapsem, Magisto, Tingiz, TVTak and Jumboard.

These six are just the latest to join this huge cluster. This past week, after attending Kinnernet (Israel’s equivalent of Foocamp, run by ICQ founder and seminal investor Yossi Vardi) as well as the 3,000 (that’s three thousand) person Com.Vention tech conference and finally startup launch event Techonomy3, organised by uber-blogger Orli Yakuel, I can confirm that this is, as Saul Singer’s book says, the card-carrying Startup Nation. That’s not to say that we need to worry in Europe – but if there was a super concentration of startups to be found outside of London, Paris and Berlin and within a 4 hour flight, this would be it. And with billions in venture capital, Israel dwarfs Europe’s VC industry.

In fact it almost has a problem. With so many Israeli entrepreneurs, I heard slight rumblings of discontent among one or two guys here that the bar was now much higher for first time entrepreneurs. Whether that’s the bitching of a minority it’s hard to say – but perhaps a good problem to have in any healthy ecosystem.