I use computers and the Internet all the time and really like them. They are an important part of modern life. And it’s pretty cool to know how they work. So when my mom asked me to help her review some Kano products I was like, “Yes! Let’s do it right now!”

Kano, if you don’t know about it already, is a company that makes interactive coding devices for children (and others) to help them learn more about technology and how computers and other electronic devices work. In the past couple of weeks I have looked at two different Kano devices, the Pixel Kit and the Motion Sensor Kit.

I started off with the Pixel Kit, a hand-held LED light board that launched in July.

It was pretty exciting since I was using an actual machine, using coding to control it. I liked how the whole thing came in parts in the box, and we had to assemble it as part of getting to use it. It reminded me of something my dad and I play with called Snap Circuits.

Then when it’s put together, you link it up with your computer using the Kano app. You create an account and then your kit and computer are connected.

I had used Scratch at school before, which is coding to make video games on a tiny screen. This was a bit cooler since with a Pixel Kit you could create programs (animations, they call them, made either with the Kano’s own coding blocks or JavaScript) that control the Pixel’s 128 LED lights. I liked making light shows that responded to sound: clapping or other loud noises would give you bursts of light. They were awesome (my mom says I can’t keep writing ‘cool’). 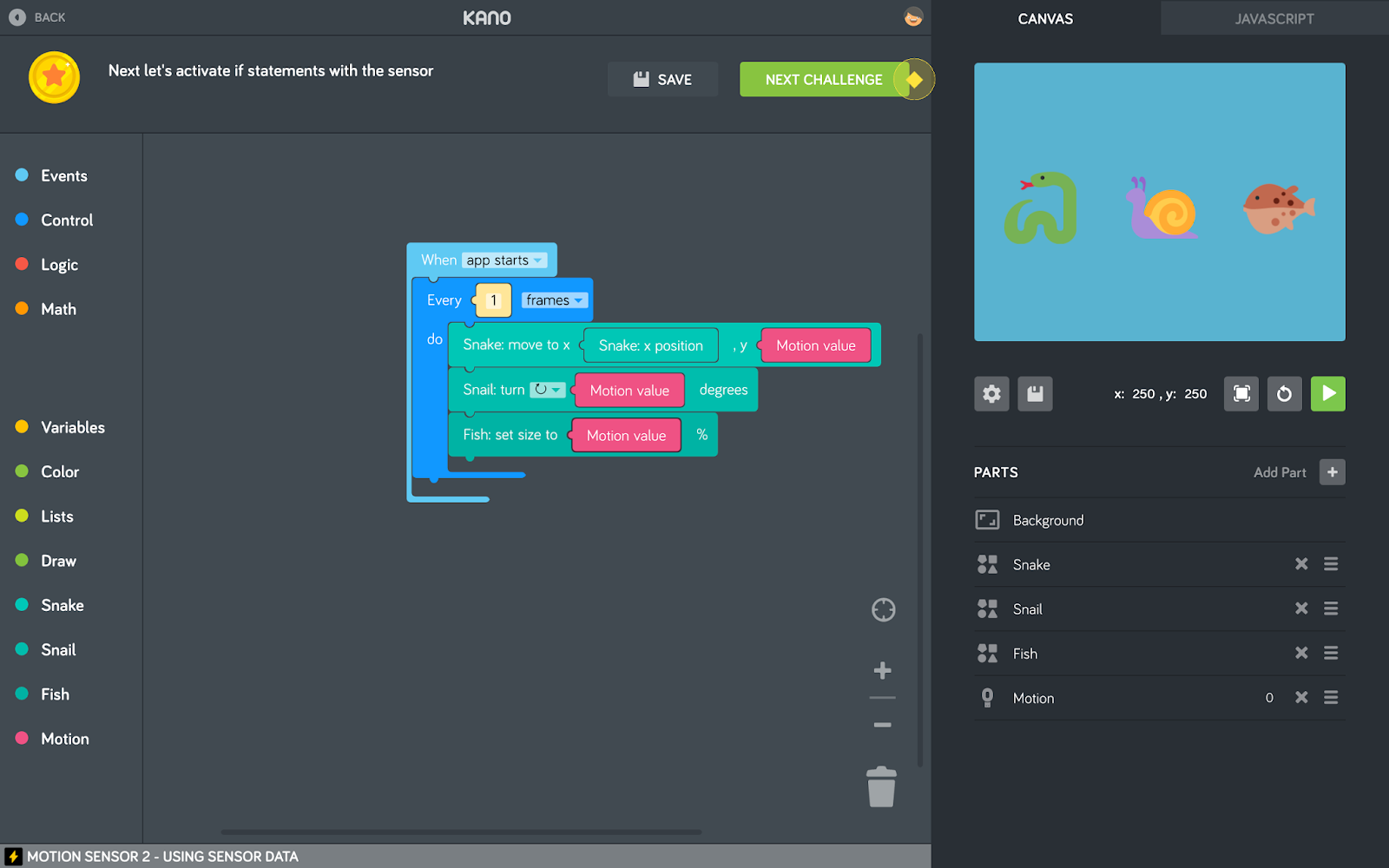 I also made games, following the Kano instructions. One was about a hero in search of a treasure. You have to guide the hero towards the treasure.

There was also an accelerometer that you could attach which let you create games where you could tilt the Pixel Kit (it fits in your hand) to move the lights around. Kano has the scripts set up like tasks for you to learn, which helps learn how to do it. I’m pretty sure I could create my own simple games now for the Pixel without the instructions.

A couple of weeks later, we added to our Kano collection with the Motion Sensor Kit. This is a small gesture controller that also works with the Kano app.

You don’t need the Pixel Kit to use it. Like the Pixel, you create scripts on your Kano app. With the Motion Sensor, those scripts let the app respond to your movements as you wave your hand over the motion sensor.

One of the scripts I made was to make a “strumming guitar.” When you waved your hand over the motion sensor as if you were strumming a guitar, on the apps screen you could see guitar strings that moved and made sounds with your movements.

You could also create little pictures that responded to the movements, turtles that spin and snakes that go up and down. And others like this:

As with the Pixel, you can also make games. One that I liked was “Pong,” which made my hand into a table tennis paddle and I played with the computer.

My mom wants me to say also what I didn’t like about both. I think to improve the Pixel Kit, it would be good if there were a wider range of things to do, and maybe a way to fit more than three of your own creations on to your Pixel Kit. That would make it more exciting.

It was also a little fragile, especially since it’s kids using it. One day the battery just disconnected from the ‘brain’ (we had to glue it back). And my mom broke off the power button while trying to glue the battery back, so we had to glue that, too.

(ed. note: We accept this is possibly more our fault than Kano’s. Also, it would have been good to be able to get a Kano app for an iPad or the Google Chromebook Pixel that the family uses rather than a Mac. The Kano products also work with Windows computers and the previously released Kano Computer Kit.)

The Motion Sensor was more sturdy, but it would have been better if it wasn’t tethered to my mom’s Mac.

Both can be purchased either directly through the Kano store. In the US, they will soon also be on Amazon.com, Barnes & Noble, Toys R Us, ThinkGeek and Gamestop. In Canada, the product will be available at Indigo, Toys R Us and The Source. In the UK, it will also be on amazon.co.uk.

We hope you liked this blog.